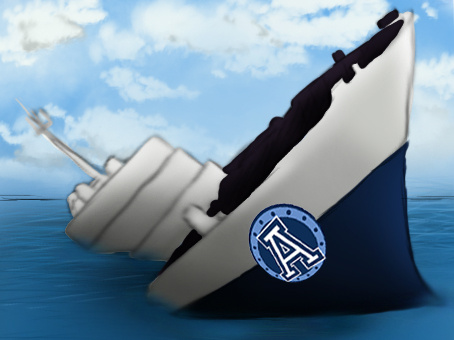 “The ship be sinking,” was the famous quote Michael Ray Richardson gave to reporters as the 1981-82 New York Knicks’ season collapsed. Yet 35 years later, the quote can perfectly be applied to the dysfunctional Toronto Argonauts. The Boatmen’s ship is sinking faster than the titanic after a self-destructive off-season.

Following a 5-13 season, the Argos decided to fire their long-time general manager Jim Barker. The team’s poor record was justification for that decision. The only problem was how poorly the Argos executed their decision. The Argos were eliminated from the playoffs on Oct. 22. The decision to fire Barker was made on Jan. 24. The Argos decided to fire Barker three months after the team had been eliminated from the playoffs. The only question anyone can ask is, what took so long?

For three months, Barker was in charge and able to make personnel decisions as he had for the previous six seasons. Barker was able to sign quarterback Drew Willy and pass rusher Shawn Lemon to contract extensions. Now the team sits, without a general manager just weeks before free agency opens Feb. 14.

Argos President and CEO Michael Copeland made the decision to part ways with Barker and replace him with head coach Scott Milanovich and assistant general manager Spencer Zimmerman. The solution is nothing more than a stop gap. The unexplainable delayed decision to fire Barker has disrupted the entire structure of the organization.

Two days after firing Barker, Milanovich resigned as head coach to accept the Jacksonville Jaguars quarterback coaching job. Within a span of 72 hours the Argos were left without a head coach and general manager. The Argos window to interview candidates on other teams’ coaching staff closes Jan. 31. The Argos will be interviewing candidates without being able to offer any structure or job security to whoever they talk to.

One of the reasons Milanovich left was because of the lack of job security. Milanovich was smart enough to realize the situation he was in. Whoever accepts the Argos general manager job will want to start fresh with their own head coaching hire. Knowing that he was in a no-win situation, Milanovich bolted. Everyone who the Argos interview knows that they will be in the same situation that Milanovich was in until the Argos figure out their front office structure.

“The ship be sinking,” Richardson quote was echoed by current Argos defensive back Jermaine Gabriel. Gabriel tweeted “I need a sinking ship emoji.” For Argos fans, there is little reason to be optimistic. The organization is a mess, and the team appears headed for another disastrous season.

The Argos hired Copeland in July 2015, after nearly a decade serving as the CFL’s CEO. But he could be next on the Argos firing line. Copeland failed to get fans in the seats in the Argos first season in BMO field. Good luck getting people to buy tickets this year, after the team’s awful offseason. He failed to properly judge the market for the Grey Cup. The team over-priced tickets, forcing them to drop ticket prices and paper most of the stadium for the CFL’s showcase game.

The CFL needs Toronto to be a strong market but Toronto has never figured out how to build a successful organization. Instead, the team has constantly made excuses. BMO field was supposed to be the solution to the team’s problems. But now Toronto is learning that the Argos’ problems run deeper than the stadium. The problems are everywhere and it’s time for Toronto to stop making excuses and start coming up with creative solutions.