The featured artist: We Will Help Each Other To Be Great and Good 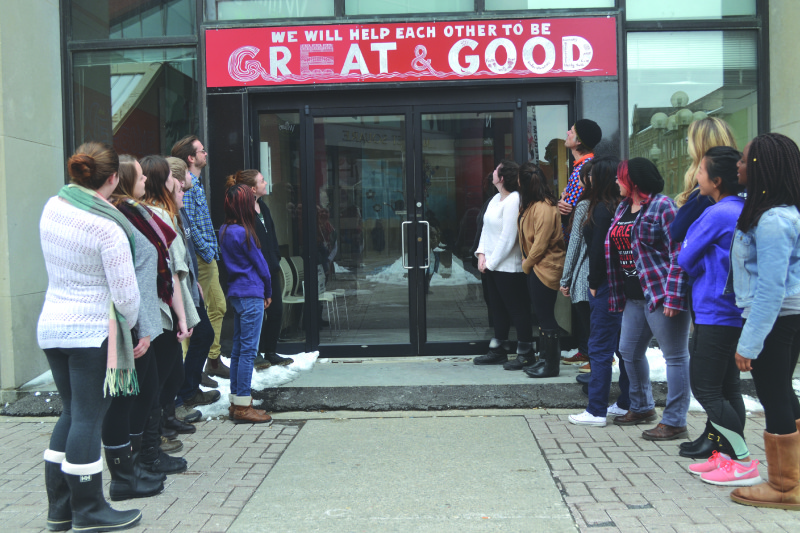 The Featured Artist is a Laurier Brantford student who is constantly striving for creative and artistic excellence. The medium isn’t what’s important; it’s the art. This weeks Featured Artist is unique. We have interviewed a handful of people in the studio space of We Will Help Each Other To Be Great and Good. Here are the voices of Kyleen McGragh, Sam Haldane, Azka Choudhary and Jaycelynn Rose.

How long has We Will Help Each Other To Be Great and Good, been open?

Kyleen: Since the beginning of February.

How many people make up the team at Will Help Each Other To Be Great and Good?

Sam: It’s hard to say because everyone who’s walked in the door has helped in one way or another.

How do you feel the atmosphere of the studio affects the the work process?

Kyleen: The atmosphere makes the studio. If it didn’t have the care free atmosphere it wouldn’t be a studio, it would be just a classroom.

What made you want to volunteer at We Will Help Each other to Be Great and Good? How do you feel it has affected your abilities as an artist?

Jacelynn: The diversity of the people, and being a part of the conversation made me feel great. Growing up in an environment where my voice wasn’t encouraged, it gives me afromation; I have a voice and it matters.

I’m aware that the inspiration behind the studio stems from a document written in 1910 called “The Memorial to Laurier.” What made you want to focus of this specific piece of history?

Kyleen: It’s a part of history that’s been neglected. I took Indigenous Studies in school and we never heard the Indigenous side of the story. That’s how I feel at least.

What are some of your favourite mediums that you’ve used in the piece so far?

Sam: There’s some wood in the piece that gives it a nice, natural feel.

Kyleen: Yeah, there’s a real juxtaposition between the wood and the metal.

Jacelynn: China markers, tiles and the dremel tool. I was also very inspired by the wolf piece, because I have an affinity for wolves and I love to draw.

From an educational standpoint, how do you feel that, We Will Help Each Other to be Great and Good is beneficial?

Azka:I believe that this piece will generate a lot of discussion on topics of Indigenous cultures, traditions, and fundamental rights that have too frequently been overlooked. This art piece will be useful in opening discussions regarding the role Wilfrid Laurier played in the history of the Indigenous peoples. For young viewers, it’s a piece that will encourage kids to talk about their roles in destroying the oppression and how they can create change.

I have to ask about the other piece in the studio. Is that piece based off of “The Memorial to Laurier” as well or is it apart of something else?

Azka: The other piece in the studio is called “Peace Officer” and does not have connections to the Memorial to Laurier text.

What is something that you’ve learned while being at this workshop?

Azka: The process of creating art and functional objects through aluminum and other recycled materials is a technique I was unaware of. Prior to these workshops, the thought of producing art using the techniques that Dave employs would not have been a reality for me. With that being said, Dave’s work is unique, inspiring and captivating!

Sam:I learned that I liked to use my hands again. Using your hands to make something like this is beautiful and awesome.

How much longer can we expect to have We Will Help Each Other to be Great and Good in Brantford? Will it be a permanent studio or just until the project is completed?

Azka:From my personal understanding, I believe that the studio space will be closed once the project has been completed. With that being said, it is a setting that I believe should be incorporated into other classes or should be used for future projects.

Sam: We need to see it stick around for more artists. Personalities grow here, which is something that can get neglected in university.