Stepping into the unknown: One woman’s year-long journey to India, Africa and back 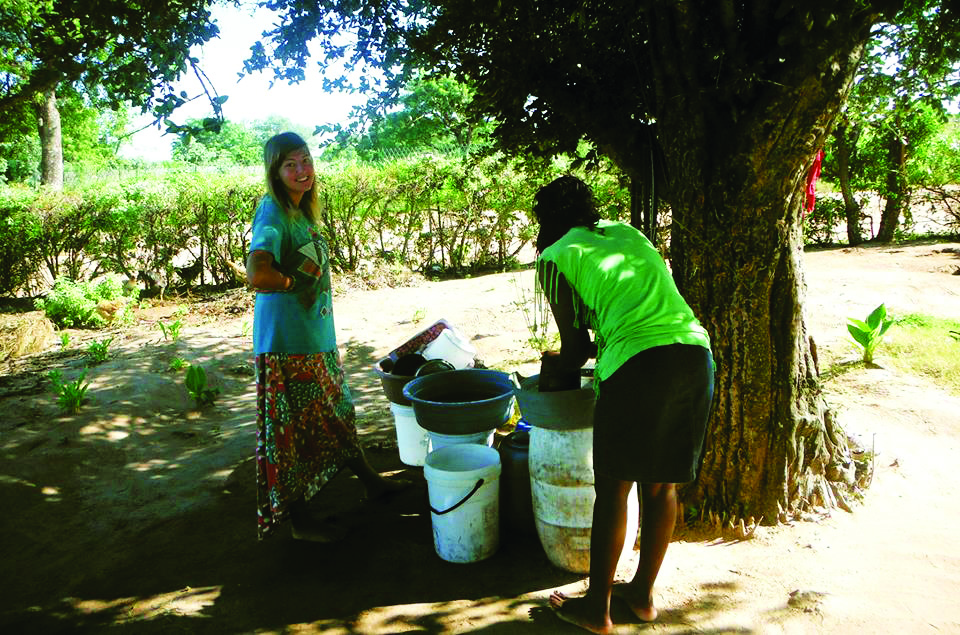 There comes a time for all of us when life just becomes stagnant. You can be bored of the routine, frustrated with a lack of success or just want for something new. Some of us choose to just put our heads down and push through life, hoping things get better. Others think real hard about what they can do to get that change, and explore different opportunities. This is the situation in which Alicia Krawchuk found herself in the fall of 2012, and ultimately what led to her travelling to India and South Africa for the next 9 months to work with orphans, prostitutes, the poor and the impoverished.

“There was just massive failure in my personal life, and it made me want to escape and flee the city,” says Krawchuk. Krawchuk, 25, of Edmonton, had just had a very bad end in a relationship, and in school and the rest of her life nothing was working out the way she planned. She says she used to be afraid of making big moves, and found the unknown terrifying. “It’s kind of cool, because at that time, I lost everything I cared about, and had nothing left, so I wasn’t scared anymore. I just wanted to go see the world,” says Krawchuk. When asked what she was looking to find on her trip, Krawchuk says she was just so hungry for meaning and substance. “I was so tired of mundane living, and doing things I don’t give a shit about. I followed this God-given sense of urgency that if I didn’t do something important, I would die,” Krawchuk says. And finally, with nothing left to hold her back, she began to look for places she could make a worthwhile contribution.

“I had always wanted to go to India. I’d read books about it and it always fascinated me. Just the whole idea of India,” says Krawchuk. She was watching TV one afternoon and saw an ad. “There was this Canadian couple on TV, Stewart and Monique Shaw, and they had taken kids that live in the slums and train stations in Kolkata and made a home and school for them. I emailed them and said I would love to help, and that got things going,” says Krawchuk. Krawchuk went as part of the STM network, which is an organization that helps people go to other countries and do missions-like work.

Krawchuk was in India from October 2012 to mid-February 2013. “There are 21 kids in the school, varying in age, and we teach them to read and write,” says Krawchuk. Krawchuk loved this opportunity to be with these kids and help them, many of whom had never had the chance to go to school before. She also worked with a jewelry making business that Stewart’s wife ran, which employed prostitutes and sex-trade workers from Kalighat, Kolkata’s red light district. “It was so eye-opening, just getting to know these women. They have been raped and trafficked, yet they have peace, and that really taught me so much, and I was so glad to be able to help them in any way,” says Krawchuk with a smile.

When her time in India came to an end, Krawchuk still had a couple of months before she had to be back in Edmonton. She talked to her agency, and they told her about Hands At Work, a program in South Africa through the STM network. She decided to try that out, and was in Africa from February 2013 until mid-May, when she went back to Edmonton.

Hands At Work is a program that sets up groups to help the poor, but with a unique twist. “Their model is a little different from other models. They focus on the idea that if something starts from within the community, then it will last after the organization pulls out,” Krawchuk explains. They go to communities and churches in South Africa (and six other countries in Africa), and explain that they have a biblical and moral responsibility to help the abundance of poor people there. “The people sometimes get their backs up, but there are always a few people, mostly women, that respond, and want to help. So we help them start a feeding program, and help it get off the ground. We help them do it themselves though, so they know how to deal with problems,” says Krawchuk. This is a refreshing change, as it is not based on control or profit, but sustainability. Krawchuk says that when the organization leaves to create other groups, the work keeps going, and does not lose a step. “It is a very holistic and family/relationship approach, and so, in that way, it is very African,” Krawchuk adds.

Krawchuk’s time in Africa was especially rewarding as it hit close to home. “White people live in beautiful towns, with malls and stuff, but just 20 minutes out are slums where the black people live, and it’s very poor. It was built off the Canadian reserve system. It’s really weird, and basically the exact same,” Krawchuk says. Krawchuk sees the same mistreatment happening there, and feels sickened that the situation exists.

When her trip came to an end and she was headed back to Edmonton, Krawchuk admits she was emotionally drained. Having poured all she had to give to these poor victims of life, she could now reflect on all that had happened in the last whirlwind of a year. “I went in being super North American in my mentality. I had all these skills, and was really going to put a dent in poverty. But I ended up being the one that learned the most. These people have so little but they taught me so much about life,” Krawchuk recalls. Krawchuk admits that she is a changed person, and that she could not go back to being who she was even if she wanted to. “Working with these prostitutes, and getting to know all these kids born in slums, I realized that victimizing myself and feeling bad for myself is the worst thing to do. Bad and horrible things happen to great people all the time,” says Krawchuk. Seeing that these people are still good and happy despite their circumstances was monumentally life-changing for Krawchuk. She went in broken and wanting to help people, to do something worthwhile. She left healed, not sure if she made as much of an impact on them as they did on her, and she left fulfilled.

Krawchuk has been back in Edmonton since May 2013, and just started a new job working with autistic children. But the transition to life back home has not been easy. “I feel like for me, the reverse-culture shock was worse than the initial culture shock. Going to India was crazy to me, but I like learning new things, so it was fun and exciting,” says Krawchuk. Krawchuk loved how social it was in Africa and India, and constantly being around people and learning and sharing with one another. “Coming back is more difficult. My friend group is going through a transition as they get married or take other steps with their lives, and they want me to change back to their friend, old Alicia, but I can’t,” Krawchuk says. Over time, she has accepted that she is back in Edmonton and gotten used to that. She was originally going to go on another trip, but now feels that is a more selfish idea, and wants to do something more permanent to help the people she cares about. “My main goal right now is to somehow link the two worlds, to bring the compassion and love I found on my trip back to the marginalized people here,” declares Krawchuk.

Life is not always fair, and sometimes things happen that leave us feeling broken and defeated. But Krawchuk’s story is one of hope and triumph in face of these circumstances, and she hopes to share that with people who find themselves in similar situations. “Before I was like an empty shell. In so many ways I was lost, doing things I didn’t care about, and afraid of risk,” says Krawchuk. She valued comfort and being cool, but this trip changed everything. Krawchuk sums it up this way: “I’ve had a taste of what it feels like to be in the centre of God’s will. I’ve been able to see what it’s like to have nothing else to cling to, and still be so fulfilled with my day-to-day life.”

Alicia posted video diaries of her trip, to check them out, go to the following link: http://vimeo.com/user4319297/videos

2 thoughts on “Stepping into the unknown: One woman’s year-long journey to India, Africa and back”