Raptors on pace to be bridesmaids to Cleveland again 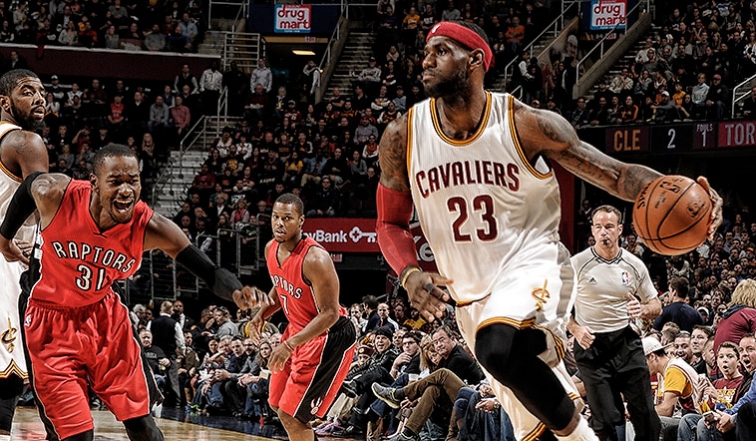 The Toronto Raptors are coming off of their best season in franchise history. The team won a franchise record of 56 games and reached the Eastern Conference Finals, before losing to the eventual champions.  The Cleveland Cavaliers eliminated them in six games.

The Raptors have a few questions coming into this season. Can they improve on last season and reach the NBA finals, or have they peaked with the Demar DeRozan and Kyle Lowry core? The answer to both of those questions will be determined by how successful the Raptors are replacing key role players who left in the off-season when the NBA salary cap exploded.

Gone in the off-season are a trio of big men who played roles within the Raptors rotation. Off to Brooklyn is Luis Scola, who started the season as the starting forward, before being phased out of the rotation during the playoffs. James Johnson is now with Miami after finding himself in the doghouse of Head Coach Dwayne Casey during both of his stints with the Raptors. When Johnson found himself on the court he proved capable of playing both forward positions. The big loss for the Raptors was the departure of Bismack Biyombo to Orlando for four years and $72 million. While Biyombo’s offensive game was limited to scoring in the paint, his rebounding and shot blocking presence will be difficult for the team to replace.

Team President Masai Ujiri had a relatively quiet off-season after resigning DeRozan to a maximum contract extension. While other teams went on a spending spree as soon as free agency began, Ujiri chose to wisely sit back and watch. The NBA saw massive contract after contract signed. Role players such as Biyombo, who Ujiri signed the season prior for $3 million, saw his annual salary shoot up to $18 million. Biyombo was not an outliner; he was part of the trend this off-season.

Ujiri’s strategy was simple: let the other teams make mistakes dishing out long-term contracts that could be albatrosses within two seasons when the salary cap stabilizes. Ujiri was patient and it paid off. When the Boston Celtics signed free agent Al Horford to a contract, they had to renounce the rights to restricted free agent Jared Sullinger and Ujiri jumped at the news. With the majority of NBA teams having already spent their newly found salary cap space Ujiri found himself in an advantageous position. Sullinger signed for one year and a third of the annual salary Biyombo received from Orlando.

While Sullinger represents a sizeable defensive downgrade from Biyombo, he does represent a sizeable offensive upgrade as well. In his lone season with the Raptors, Biyombo averaged 5.5 points per game, 6.5 rebounds and 1.6 blocks in 22 minutes a game. In his four years with Boston, Sullinger averaged at 24.9 minutes, 11.1 points, 7.7 rebounds, but just 0.6 blocks a game.

The addition of Sullinger is the only major change to the Raptors nine man rotation. Back are all-star starting guards Lowry and DeRozan. After missing the majority of the regular season with a knee injury, DeMarre Carroll is healthy. A year after receiving a four year $60 million deal, Carroll’s contract looks like a bargain in the new cap world. Carroll provides the Raptors with a swing man capable of matching up defensively with the top wings in the East, while adding the occasional corner three. Jonas Valanciunas returns as the starting center. For the Raptors to improve, Valanciunas has to develop into a double-double machine.

The last spot in the starting lineup will come down to a camp battle between Sullinger and sixth man Patrick Patterson. While Patterson struggled shooting the ball last season, his name was continually found within the Raptors best plus-minus lineups.

Rounding out the nine man rotation are backup guards Cory Joseph, Norman Powell and Terrence Ross. Joseph proved to be a capable backup to Lowry, as he posted career highs in minutes and nearly every statistical category. Powell already holds the title, of being the Raptors best second round pick in franchise history after just one season. But that is more because of how terrible the Raptors draft history is. After barely seeing the court in the first half of the season, Powell found himself a starter down the stretch. Ross continues to be a great enigma to the Raptors fan base. The talented and freakish athleticism of Ross has shown highlights of potential, but through four seasons, Ross has failed to put his game altogether.

The Raptors nine man rotation is good enough to win close to 50 games provided they stay healthy. But for the Raptors to match or exceed last season’s success, the Raptors need to find a contributor from one of the former first round picks, the team has stockpiled on the end of their bench.  With two first round picks in the past draft, the Raptors selected center Jakob Poltl from Utah ninth overall and forward Pascal Siakam 27th overall. Poltl is expected to battle Lucas Nogueira for minutes behind Valanciunas. While Siakam is a developmental prospect who could find himself playing more in the D-League than the NBA this season. Delon Wright, the Raptors’ first round pick in 2015, and former Utah teammate of Poltl is expected to miss the first half of the season following shoulder surgery. While it is anyone’s guess, if the team ever receives any production from Bruno Cabocolo in a game that is not a blowout.