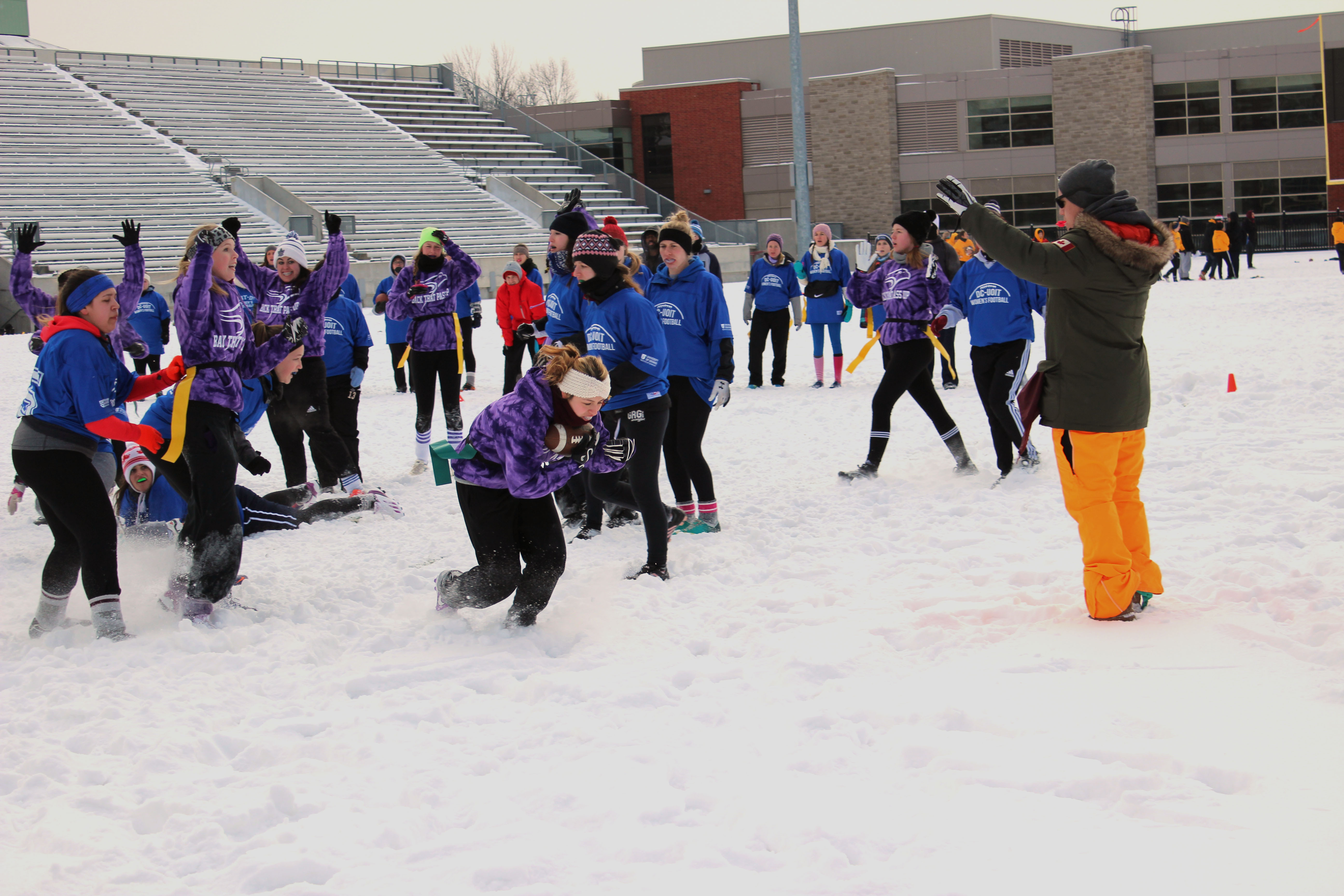 When you think “powderpuff”, football isn’t what comes to mind. But year in and year out in one of the largest growing women’s sports, that’s what their brand of football is called, and it couldn’t do a worse job describing the game women play.

Powderpuff football is flag football; there isn’t any tackling, so instead you have to grab an opposing player’s flag in order for a play to be called dead. But other than that, you need to be just as athletic as anybody playing tackle football, so calling it “powderpuff” demeans not only the players but the sport itself. “I would say [powderpuff football] is extremely outdated,” Golden Hawks powderpuff football team captain, Tamara Skoretz said. “We try to caption it as ‘women’s football’ more than anything because the first reaction whenever we say powderpuff is usually a giggle or an eye roll or something like that. It doesn’t embody what the sport is all about.”

That is one of the main problems with the name; the sport’s origins are from a different time in which women’s sports weren’t taken seriously and based on the dainty, feminine stereotype of decades ago. According to the Madison Daily Leader, which reported on what is widely considered to be the first powderpuff football game in 1945, “The name was suggested because the women chose to poke fun at themselves by staying on the field at halftime and putting on fresh makeup before the amused spectators.”

“[Powderpuff football] is generally a new division of sports for girls in university, especially. It’s only four or five years old, so I kind of think they just embodied whatever name kind of fit a pre-existing structure and went with that,” Skoretz said. She wants to see women taking ownership and re-naming the sport simply, “women’s football” because it is a brand of football played only by women and it’s a game they’ve shaped and made their own, but she’s not optimistic that a change will occur anytime soon. “I don’t know if it will change because there’s a lot of things associated with powderpuff football and I know that this year they’re doing a lot of work with the Breast Cancer Society and the Make-A-Wish Foundation, so it’s becoming a brand, more or less,” she said.

You see the result of this brand in the United States, where there is an annual “Blondes vs. Brunettes”powderpuff football game played to raise money for the Alzheimer’s Association. Since 2005 in the Washington, D.C. area alone, the game has raised over $500,000 and is played in 16 American cities altogether. Although it’s all in the name of fundraising and the event is obviously making a sizeable contribution, players are simply perpetuating the kinds of stereotypes associated with powderpuff football.

“I never really understood [powderpuff football] either. I always associated ‘powderpuff’ with the snow, because we’re out playing during the winter, right,” Skoretz said. “So, I went back and looked into it and it was all about the girls and stuff like that and it’s not like that at all. It kind of sugar-coats it and makes [the sport] seem like a joke. That’s far from it — it’s a tough, tough game.”

Players, especially Laurier’s squad, take great pride in the game they play and are great at it, finishing first at Sheridan in 2014 and deserve to be seen in such a light. “We’re out there in the middle of the winter with no padding, no protection, nothing and that’s a whole different level … until you’re actually out there on the field or watching a game, it’s not quite the same,” she explained.

“Powderpuff football” has always been kind of perplexing; it’s almost an oxymoron. A word like that doesn’t belong with a physically demanding sport like football, regardless of whether it’s men or women playing it. And if you don’t think so, a couple of games will change your mind.