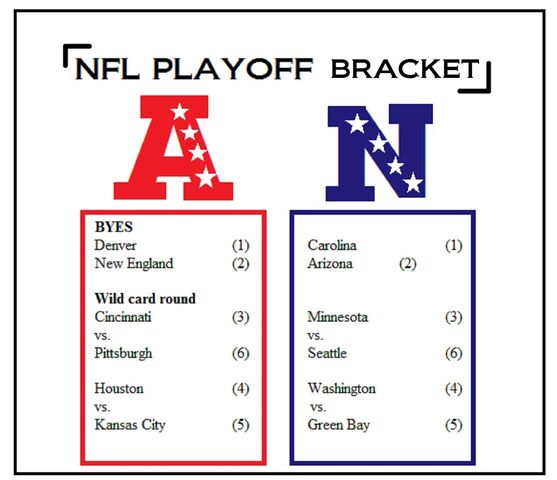 It’s that time of year again. The NFL playoffs are here and begin Jan. 9 with the Wild Card Round. Below is a playoff preview to get sports fans caught up with the facts before the big, upcoming month of football begins.

The Denver Broncos (12-4) clinched a first round bye when they beat the Cincinnati Bengals 20-17 in overtime in Week 16. Their 27-20 victory over the San Diego Chargers on Sunday earned them the No. 1 seed for the playoffs.

Quarterback Peyton Manning made an appearance on the field Sunday for the first time since he injured his plantar fascia on Nov. 15 during a game.

Backup quarterback Brock Osweiler took Manning’s place while Manning was out and carried the team through seven games going 5-2 in his starts.

Whether Manning is fully recovered and on the field for the playoffs or not, the Broncos can guarantee a threatening offensive performance.

The New England Patriots (12-4), the defending champions, clinched a first round bye. By losing their last two games of the season New England lost their chance for home field advantage in a potential game against Denver.

The team is currently suffering a number of injuries and is doubtful about where the team will be at by the divisional round of the playoffs. The Patriots expect to have their starting left tackle, Sebastian Vollmer, who suffered an ankle injury over the holidays, recovered and ready in time for the playoffs. The team can only be hopeful about the rest, including wide receivers Julian Edelman and Danny Amendola, and safeties Devin McCourty and Patrick Chung.

The Pittsburgh Steelers (10-6) and the Cincinnati Bengals (12-4) will play each other in the Wild Card round. The Steelers passed the New York Jets in the Wild Card standings on Sunday when the Steelers beat the Cleveland Browns 28-12 and Jets lost to the Buffalo Bills 22-17.

The Bengals’ starting quarterback, Andy Dalton, has been out with a hand injury for the past few games. The team will go into the playoffs with their backup quarterback, AJ McCarron, starting in Dalton’s place.

The Kansas City Chiefs (11-5) and the Houston Texans (9-7) will play in the other AFC Wild Card game. The Kansas City Chiefs went 1-5 to start the season. Things turned around for the rest of the season when they won ten games in a row. They could have won the West division if the San Diego Chargers had defeated the Broncos last Sunday. The Chiefs will serve as the No. 5 seed since the Broncos came out with the victory.

The Texans haven’t been to the playoffs since the 2012 season, but this year they clinched the South division and are the AFC’s fourth seed. They ended their season by beating the Jacksonville Jaguars 30-6.

The Carolina Panthers (15-1) earned a first round bye and No. 1 seed. Carolina fans have high hopes for their Panthers since they were undefeated up until their second last regular season game, when they lost 20-13 to the Atlanta Falcons on Dec. 27.

The Panthers didn’t take the loss lightly and were back in their groove on Sunday and came out stronger than before, beating the Tampa Bay Buccaneers 38-10. This team will be among the most dangerous in the playoffs.

The Arizona Cardinals (13-3) clinched the other first round bye. Up until Week 17 of the regular season, the Cardinals carried the best offense in the league. They choked on Sunday in their game against the Seattle Seahawks, losing 36-6. Their starting kicker, Chandler Catanzaro, was having an off game especially and was replaced for the second half of the game.

If the Cardinals don’t get their heads back in it, their road to the Super Bowl might come to a close earlier than they would like.

Facing off in one of the Wild Card games will be the Seattle Seahawks (10-6) and the Minnesota Vikings (11-5). The Seahawks were in the 2015 Super Bowl and could potentially be on the same path this year after their 36-6 win over the Cardinals on Sunday. They are within the top five teams for points (26.4), yards (378.6) and rushing yards (141.8). Look out for Russell Wilson, who’s playing some of the best football of his career this season.

The Vikings closed their season by dominating the Bears, Giants and Packers. Teddy Bridgewater has been a key to their success and will be a threat to opposing teams in the playoffs. The Vikings came through with a 20-13 victory over the Packers on Sunday to win the North division.

The Washington Redskins (9-7) and Green Bay Packers (10-6) will be facing off in the NFC’s other Wild Card game. The Packers fell short of earning their fifth consecutive division title this season. They lost their final two regular season games by 37 points combined. The Packers have been suffering from slow starts on offense, mainly because coach Mike McCarthy keeps trying new things on offense that don’t work.

Kirk Cousins will be one to look out for on the Redskins. Although he had a rocky start to his season with the Redskins, Cousins has made a turnaround and threw 11 touchdowns in his last three games, carrying Washington to the playoffs and securing the East division.