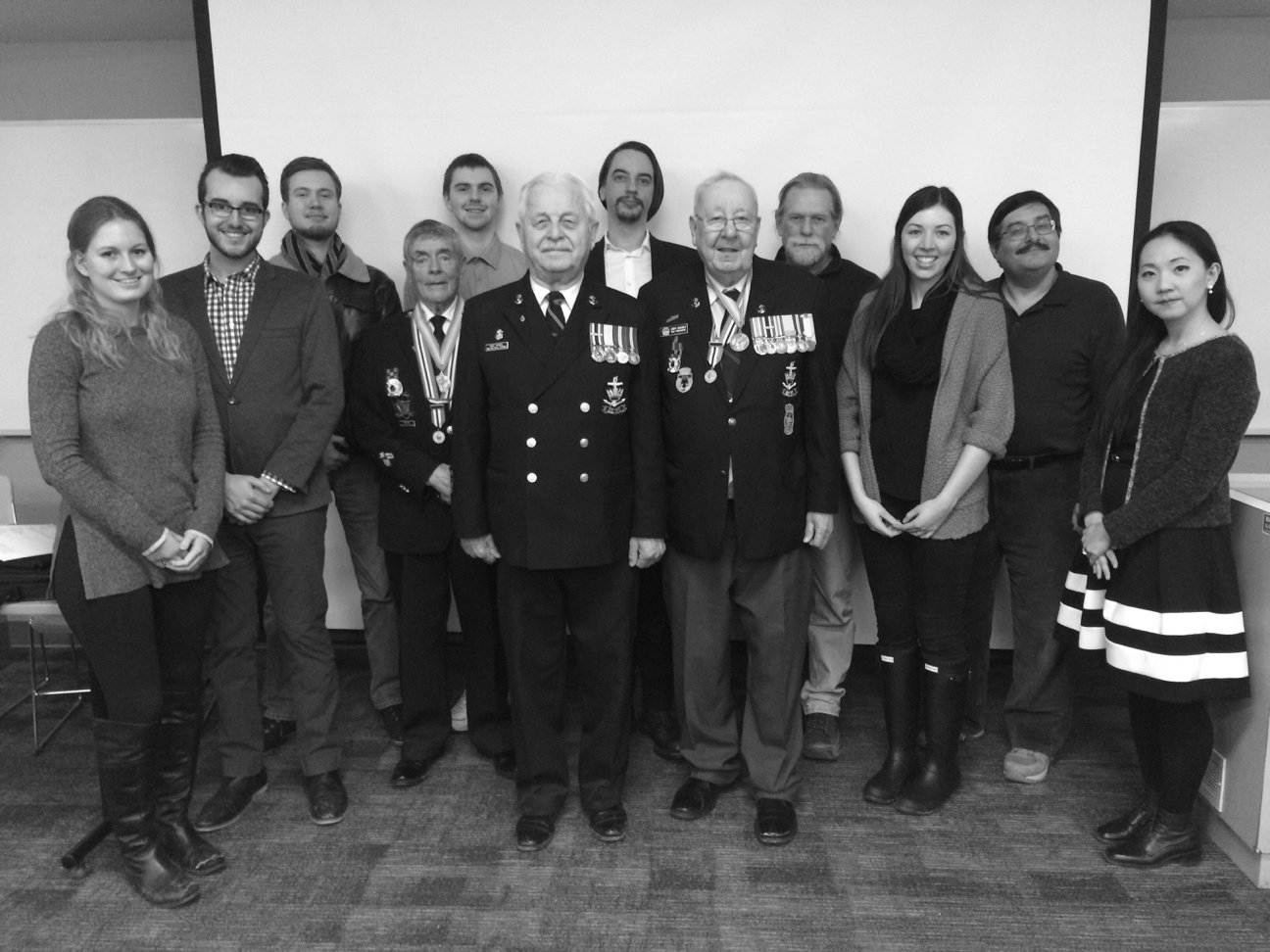 On Tues. Feb. 6 and Wed. Feb 7, the History Students’ Association presented their 2018 People Make History Lecture series in which three naval veterans came to campus to discuss their experiences in the Korean War. Andrew “Andy” Barber, Ron Kirk, and Mike Venzel spoke to students about enlisting in the navy and life aboard Canadian warships in the 1950s.

This is the third People Make History Lecture Series the History Students’ Association has run. “These People Make History events provide us with a rare opportunity to hear first-hand accounts of those who have been impacted by the events of history that we read about in textbooks”, said David Lacey, president of the History Students’ Association. “I believe we have a responsibility to include as many voices as possible in considering history and allow it to shape our current understanding of the world.”

The first talk of the 2018 lecture series was entitled “Three Naval Veterans Remember the Korean War, 1950-1955” and the second was called, “From Korea and Beyond: Life Aboard Canadian Warships in the Cold War.”  The three veterans; Andy Barber, Ron Kirk, and Mike Venzel brought the Korean War to life with their pictures and stories and provided students with the opportunity to learn about history from people who have lived through it.

Andy Barber started off his speech by saying, “We felt a little bit of trepidation coming here, wondering what we could do to tell you a little bit more about what you haven’t already read. But then it dawned on us, “we are history.”

Andy Barber was born during the Great Depression in 1933. He was a child during WWII, listening to the radio for bits and pieces of information about the war. Once WWII was over, Joseph Stalin, leader of the Soviet Union attempted to conquer as much of Europe as possible. After taking much of Eastern Europe, his soldiers moved upwards, bordering on Korea, believing that taking Korea would lead to conquering Japan.

At this point in time, Korea was divided in half, with a democracy in South Korea controlled by the United States and a communist regime in North Korea under Soviet and Chinese rule. The people of Korea wanted to be united and they decided to have an election. The election determined that all of Korea would become a democracy. The communists didn’t like this and on June 25, 1950, North Korea invaded South Korea, with the help of the Soviet Union and China.

Andy Barber was working at the Canadian National Railways when the war began and he joined the navy in 1951, at the age of 18. He served aboard the HMCS Haida. Their job was to go from island to island around South Korea to check for communist troops. He recalls dead bodies floating in the salt water near the islands, their clothing indistinguishable.

Mike Venzel, the youngest of the three was born during the Second World War.  He joined the Royal Canadian Navy in 1957 at the HMCS in Hamilton. He later went on to receive training in the electrical branch of the navy. The highlight of his career was in 1959 when he was escorting HMY Brittania with Queen Elizabeth and Prince Philip on board to the open St. Lawrence seaway. Earlier that same year, he spent two days lost at sea in a life-raft 300 miles off the coast of Nova Scotia until he was later picked up. He had been testing the life raft with a few other young men when they drifted off course.

Even though these three men served in different areas of the Royal Canadian Navy, they share a common bond from their memories of the Korean War. A sense of comradery between Barber, Kirk, and Venzel was evident.

When speaking about the importance of the People Make History series, program coordinator, Professor Tarah Brookfield said, “We wanted people to hear the stories, here different perspectives that are different from what they might be reading in academic sources and be inspired by those first-hand accounts about what happened. And also, to realize how history’s not just [about] the prime ministers or the generals but it’s ordinary people who made decisions in their life and took action and that impacted not only themselves but their communities and the world, in this case.”

A creative contest is being offered to all students who attended either talk. Students are encouraged to produce a creative piece of work inspired by the talks for a chance to win a Samsung Galaxy 8” 32GB Android Tablet. Submissions may be short stories or poems, paintings, or anything else creative. The submission deadline is March 2nd at 2:30pm. Submissions may be dropped off at RCW304 or emailed to mweaver@wlu.ca. For more information, contact Tarah Brookfield at tbrookfield@wlu.ca.