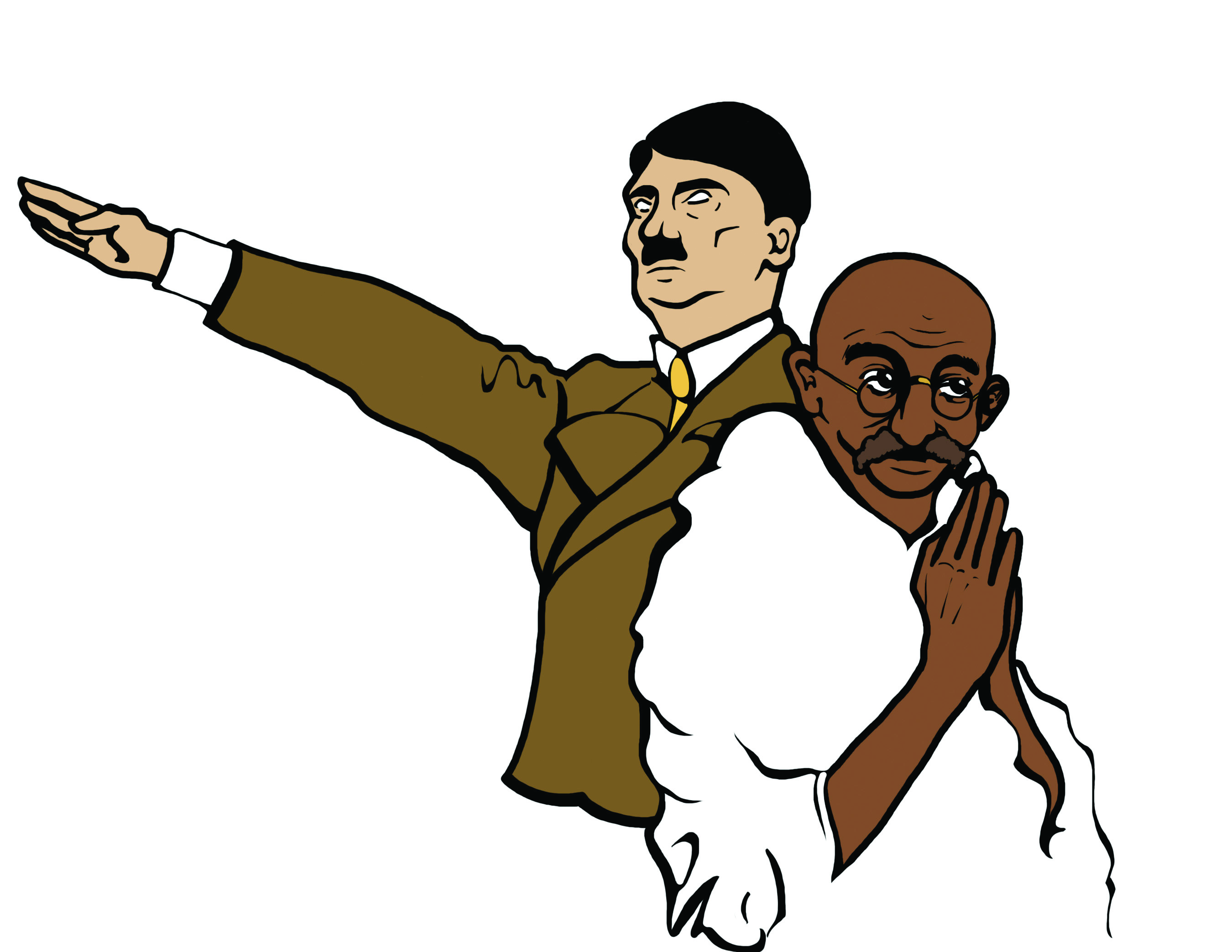 I wasn’t sure if shock was the appropriate word, or amazement, or even anger for what I read one day while online. As a bit of context, my late grandfather, as well as my step-father’s father, both fought in World War Two, and of course I’m forever grateful to them and those like them who fought. I know a few things for sure about those five years of conflict, first being that what a lot of people were fighting for wasn’t political, but for the sake of humanity. They were saving people who were being massacred for their beliefs. Another thing I know for sure is that Adolf Hitler was the bad guy. What shocked me then, were the letters to the dictator from none other than the non-violent leader of the Indian independence movement, Mahatma Gandhi. The letters from Gandhi end with the words, “I remain your sincere friend”. Words that were written only two months before the formal start of the World War.

Of course, I thought maybe these letters were fake – I’ll admit, I first saw them on the website BuzzFeed. Upon doing some research, however, I found they were in fact fully legitimate. The full letter, the most famous one (which can be read on the Sputnik website), is now kept at Mani Bhavan, in Mumbai, India. The museum dedicated to anything Gandhi was visited by Barack Obama in 2010, and I really want to know what he thought of the communication. To me, I think it’s a bit, well, juvenile.

Gandhi starts the letter with “Dear friend,” and continues to say: “Friends have been urging me to write to you for the sake of humanity.” In short and simple terms, he asks Hitler to simply stop his fight and reconsider causing a war (and of course, he hopes his letter to Hitler isn’t too much of an inconvenience, and he’s sorry if it is). From what I’ve come to understand, it was the belief of Gandhi that several other options didn’t work to quell the ways of the dictator, so maybe a polite letter from him, whom Hitler would of known had fought peacefully to reach his goals, could help change his mind. Again, I think it may have been done with a kind heart, but it was immensely juvenile.At the time this was written, Hitler had already started causing destruction in Europe, and his attitudes towards the Jewish people were known, even if his actions towards them weren’t. Gandhi knew he was a bad guy, essentially. So why did he treat him so kindly? I understand he was an advocate for peace, but I feel this was taking it too far. Think to the contrary all you want, but you can’t solve every problem by simply asking. That in itself is hard for me to write, as I think most war is unnecessary. Try as hard as I may, I can’t appreciate Gandhi’s attempts. The Indian (well, I suppose it was still British at the time) government didn’t allow this letter to be sent to the Fuehrer.

That didn’t stop Gandhi from trying again, a year later, on Christmas Eve. In the first letter, “friend” may have been a simple gesture of friendliness, but in the second letter, I’m proven wrong, by Gandhi himself. It starts with the rather blunt line, “That I address you as a friend is no formality. I own no foes. My business in life has been for the past 33 years to enlist the friendship of the whole of humanity by befriending mankind, irrespective of race, colour or creed.” This letter, much longer, tries again to stop the conflict. But, some of what Gandhi says in the hope of stopping Hitler actually just ticks me off. One line especially: “We have no doubt about your bravery or devotion to your fatherland, nor do we believe that you are the monster described by your opponents.” This may have been before total war and before the realization of what was fully happening in Germany, but, at this point, war was happening. War that my family and millions of families around the world were fighting in, and Gandhi was praising him? I think there’s a line between curiosity to Hitler and disrespect to those fighting for peace that Gandhi crossed. Again, by being juvenile.

These letters have been the base of a movie released in India titled “Dear Friend Hitler”, which I may just take the time to watch. It was filmed in India, and stars an all Indian cast, so I’m sure there will be some bias in depiction of the nation’s hero. I’m curious to see the angle they take.

I tried as hard as I could to find if Hitler and Gandhi in fact ever did meet, and it seems they didn’t. But that didn’t mean Hitler didn’t know about him. Gandhi wrote letters to his “Dear Friend” in the hopes of stopping his movement. When some British officials asked Hitler if he had any idea how to stop Gandhi’s movement, it’s reported he said “It’s simple, kill him.”