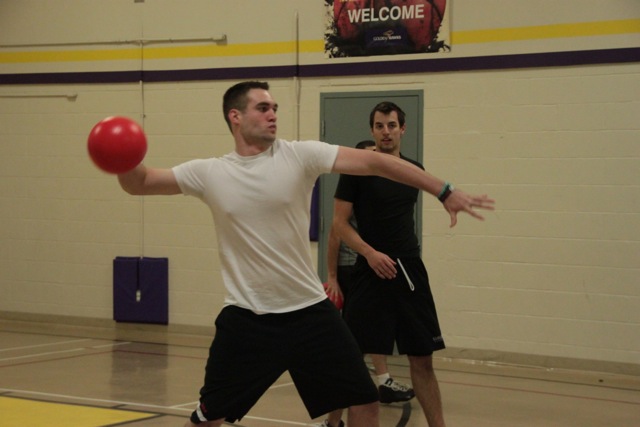 The LB extramural dodgeball team was in action again November 9, hoping to improve on a solid first tournament. This was the toughest tournament they’ve played to date, with four of their six games going to sudden death.

The Golden Hawks started the tournament against Humber North, losing a close game in sudden death. From here they were pinned against another tough opponent in Centennial College, where once again sudden death was needed to decide a winner. However, this time Laurier came out on top.

LB would meet Humber Lakeshore again in the semi-finals, with Humber having the last laugh, winning the game and dashing Laurier’s hopes of making it to the final. The team would play in the bronze medal game against Redeemer, where they were victorious.

Athird place finish in the tournament was a real confidence builder and co-captain Michelle Anger believes that the team’s preparation played a pivotal role in this.

The team’s other co-captain, Tim Miller agrees with Anger and believes that the team showed improvements from their last tournament.

“We improved immensely compared to our last tournament. After the round-robin we came out on 2nd instead of 4th like the last tourney, and we beat the team that we’ve lost to every time we’ve played them, so that was good,” says Miller.

The team played in some very close games during the tournament and the strong play of Adam Zack really helped the team claim third place.

“I feel I played very well overall on the day. The first game we played started off slow, but as the day progressed my confidence was up and I was playing to the best of my abilities. I was throwing hard and my dodging was on point all day,” says Zack.

The team will have a break until January where they will compete in their final tournament of the season at George Brown College. Miller believes the team is making great strides in their play, making it a real privilege to play with such a great group.

“I feel as if every practice we have we are getting closer and closer as a team and I can truly say as a family because we work hard together and always have each other’s backs. It’s truly an honour to work with every single one of them,” says Miller.