Laurier students install Before I Die wall in RCW 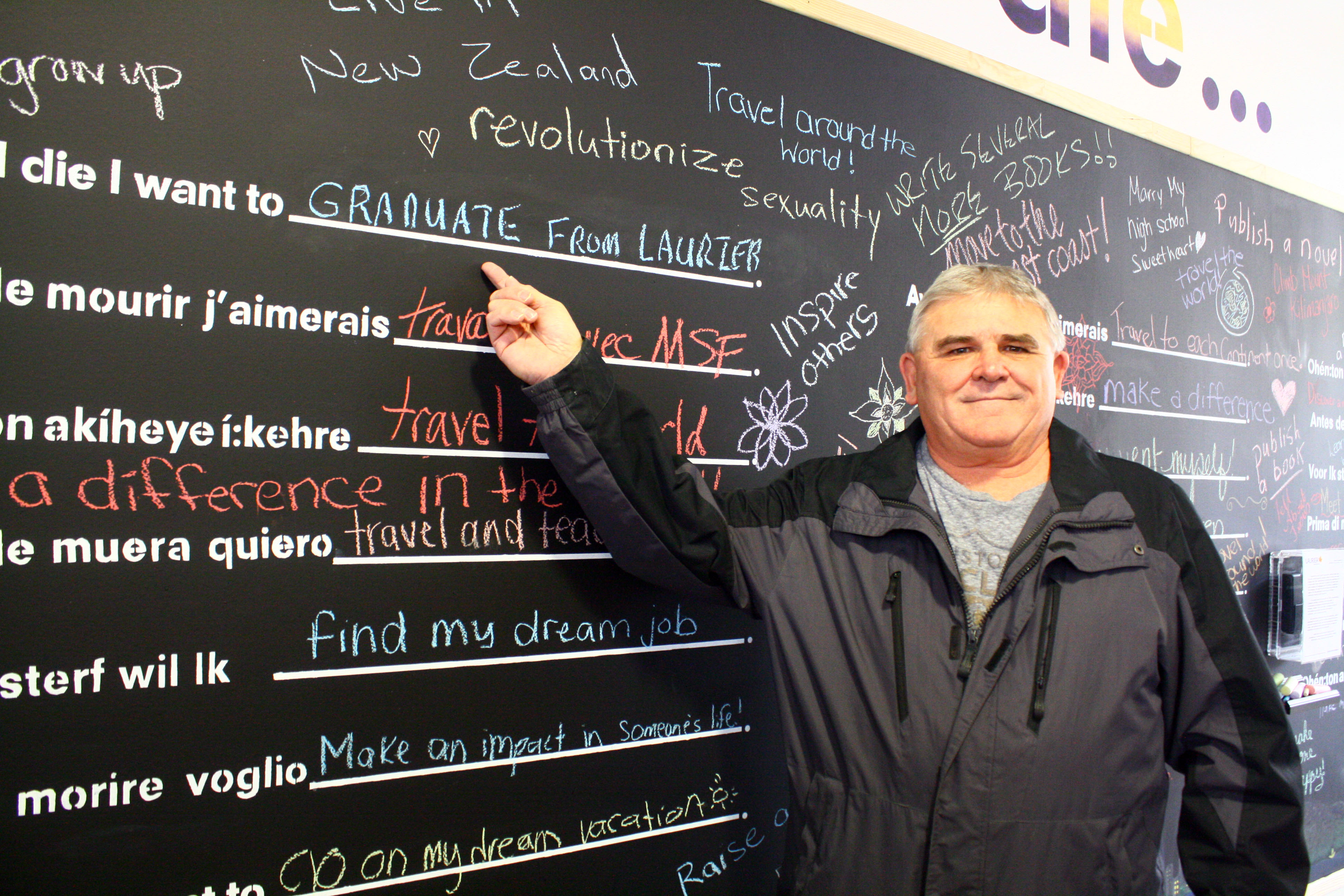 On Thursday, Nov. 13, the Before I Die wall was officially introduced to the Laurier community.

Below the yellow and purple title of “Before I die…”, there is a chalkboard for students to share their dreams anonymously. The phrase “Before I die I want to” (written in English, French, Mohawk, Spanish, Dutch and Italian) is followed by blank lines for anyone passing by to fill out.

The four students who made the wall in the RCW lobby, Nicole de Soysa, Anisha Sivasankaran, Chelsea Dawson and Kayla Doucette, had the honour of being the first to share their dreams.

“[Writing on the wall] makes me proud,” de Soysa said. She hopes that this project encourages people to “stop and think” about their dreams and aspirations.

She adds that seeing everyone bustling around the wall smiling feels rewarding. After all of their hard work, the creators were thrilled at the lineups that formed to write on the wall.

“It’s so crazy to see everyone writing on it today,” Doucette said.

Some of the aspirations shared on the wall include “Climb Mount Kilimanjaro”, “Say sorry to Ian”, “Save a life” and “Marry my high school sweetheart”.

“Whether it’s a big dream or small dream, they are all dreams,” de Soysa said.

The lines quickly filled up and so the writing has spilled onto all areas of the wall. After taking pictures to document the covered wall, it will be erased periodically to give a chance for others to write or draw on it too.

First-year criminology student Jeff Cheeves, 66, wrote that before he dies he wants to “graduate from Laurier”. Retired, Cheeves has decided to “keep his mind fresh” and enjoys attending class and doing the homework, despite the challenge of essay writing.

His son, a Nipissing University graduate, is presently teaching overseas in China. He told his father, “When you graduate, I’m coming home.”

Prof. MacRae chose to bring this community-based project to his students so that they could learn outside of the classroom and break down the usual hierarchies. He said that the process has been rewarding for everyone involved.

“[This project] is about fostering good vibes like the one you feel right now,” he said.

Along the bottom of the wall, there is a landscape of Canada coast to coast, painted by the four students, collectively. Dawson says this was an effort to illustrate how the aspirations represent Canada. An important aspect of the Canadian identity is closely related to international ties.

Sivasankaran hopes that the inclusion of six languages, which were chosen using a survey, helps people think about diversity and community-building.

“I hope LEAF students write on it too, regardless of language,” she said.

There are more than 525 of these walls spread across 70 countries around the globe, written in 35 languages.

The Before I Die wall, sponsored by the Faculty of Liberal Arts, will remain up for at least four months, though there is a chance it will become a permanent part of Laurier Brantford.