From the ground up: profiling the citizen journalist 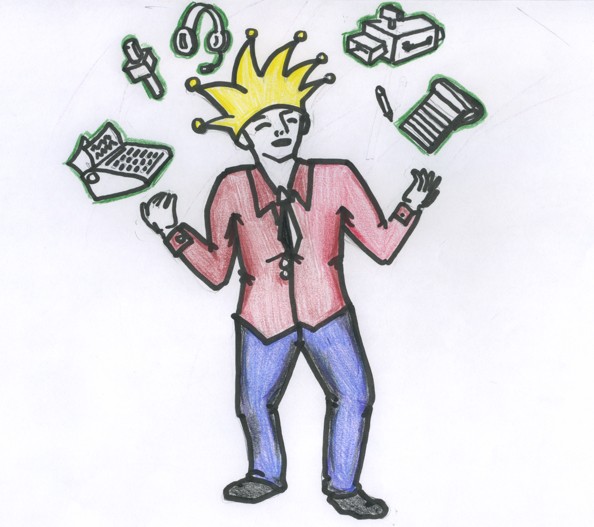 As long as there is life, there will be citizen journalism.

This has been the reality for the world of media since the very beginning. People have always been interested in sharing their angle of a story and speaking out about how it reflects their own life. From giant, sweeping events such as 9/11 to smaller, community-focused issues such as neighbourhood elections, citizen journalists have always been available to cover the story with a more human touch.

However, with great power comes great responsibility. A pen and paper (or an iPhone or a voice recorder or a camera) are all powerful tools that harness the potential to get people into a lot of trouble in the field. With this knowledge, the debate of citizen journalism versus professional journalism arises.

Tenille Bonoguore, a professor at Laurier Brantford, teaches a New Media Journalism class. Bonoguore is very familiar with the ethics that accompany professional journalism. Citizen journalists who are not familiar with these ethics, however, can be prone to practicing bad journalism.

Even though the potential for citizen journalists to disregard many important journalistic ethics exists, they are still widely accepted as a credible news source. The Toronto Star, for instance, welcomes citizen-submitted stories, known as “user generated content”. The British Broadcasting Corporation received 1,000 photos and videos, 3,000 text messages, and 20,000 emails from citizens within 24 hours of the London bombings on July 7, 2005,

“When events like 9/11 happen, citizen journalists have the ability to provide on the ground, just-in-time coverage of the unfolding of events that traditional journalists most likely aren’t there to capture,” said Dr. Kenneth Werbin, Assistant Professor of Contemporary Studies and Journalism at Laurier Brantford.

Dr. Werbin said that while these kinds of events are unfolding, the combination of citizen and traditional journalists becomes an incredibly effective coupling, and many journalists agree. In a column by Toronto Star public editor Kathy English, she said that she thinks “such collaboration is the way of the future.”

“Citizen journalism recognizes its full potential when it helps promote the idea that the value of news isn’t just about the acquisition of information but rather that news is also an opportunity for conversation, dialogue, and healthy democratic debate,” said Dr. Werbin.

While many mainstream news organizations believe that they are recognizing the importance of citizen opinion, a space for moderated comments beneath their online articles does not do justice to the effort citizen journalists are putting in on the field in order to produce raw, discussion-producing material.

“Like we saw with the Arab Spring, it was actually citizen journalists that told the world what was happening,” said Bonoguore. “I think it shows the strength of people just being able to say ‘This is what I’m seeing and this is what is happening.’”

With a new wave of technology at our fingertips, the ability to post and upload news stories from anywhere in the world has changed the game of journalism altogether.

“It was amateur footage, captured by regular Joes and distributed through social media networks that got people riled up,” said Laurier Brantford Journalism graduate Lin Abdul Rahman about the Arab Spring. “It was [that] footage and those organic distribution channels that created a shared sense of courage that finally pushed people out onto the streets.”

Rahman, who was an active member of Laurier Brantford’s Journalists for Human Rights group, is fascinated by the movements happening around the world that are fronted by citizen journalists, namely Occupy Wall Street based in New York.

Occupy Wall Street was initiated by Adbusters, who organized the first protest to be held at Zuccotti Park in New York on September 17, 2011. Since then, the movement has blossomed worldwide, with its main issues being greed, corruption, social and economic inequality, and the influence of corporations on government.

Throughout the protest in New York City, police brutality was a recurring issue. Police were caught on video by citizen journalists unfairly arresting protestors and initiating unnecessary and illegal violence. These videos and photos brought to light many horrific incidents caused by the hands of police that only made the Occupy protestors work harder to be heard.

The Occupy movement just recently celebrated its first birthday, and protestors and citizen journalists alike continue to fight for their beliefs.

“If you look into history, there’s been wave after wave of revolutions that parallel the Occupy movement,” Rahman said. “I thought Occupy was novel because I wasn’t around to witness the other revolutions that have occurred in the past. But now I can see that it’s a necessary part of a pattern.”

This pattern – the corruption of governments – has always been happening. However, with citizen journalists reporting from the street, movements such as Occupy get the coverage they deserve in order to tell the government what they, the people, want.

It is clear that in this day and age, citizen journalism shows no signs of going anywhere. It helps us keep an all-seeing eye on the powers-that-be. It hinders us by not always adhering to proper journalistic ethics. It empowers us to be able to voice our opinion and be heard. But most importantly, it reminds us that as long as there is life, there will be those who report on it.