First Nations have never been idle 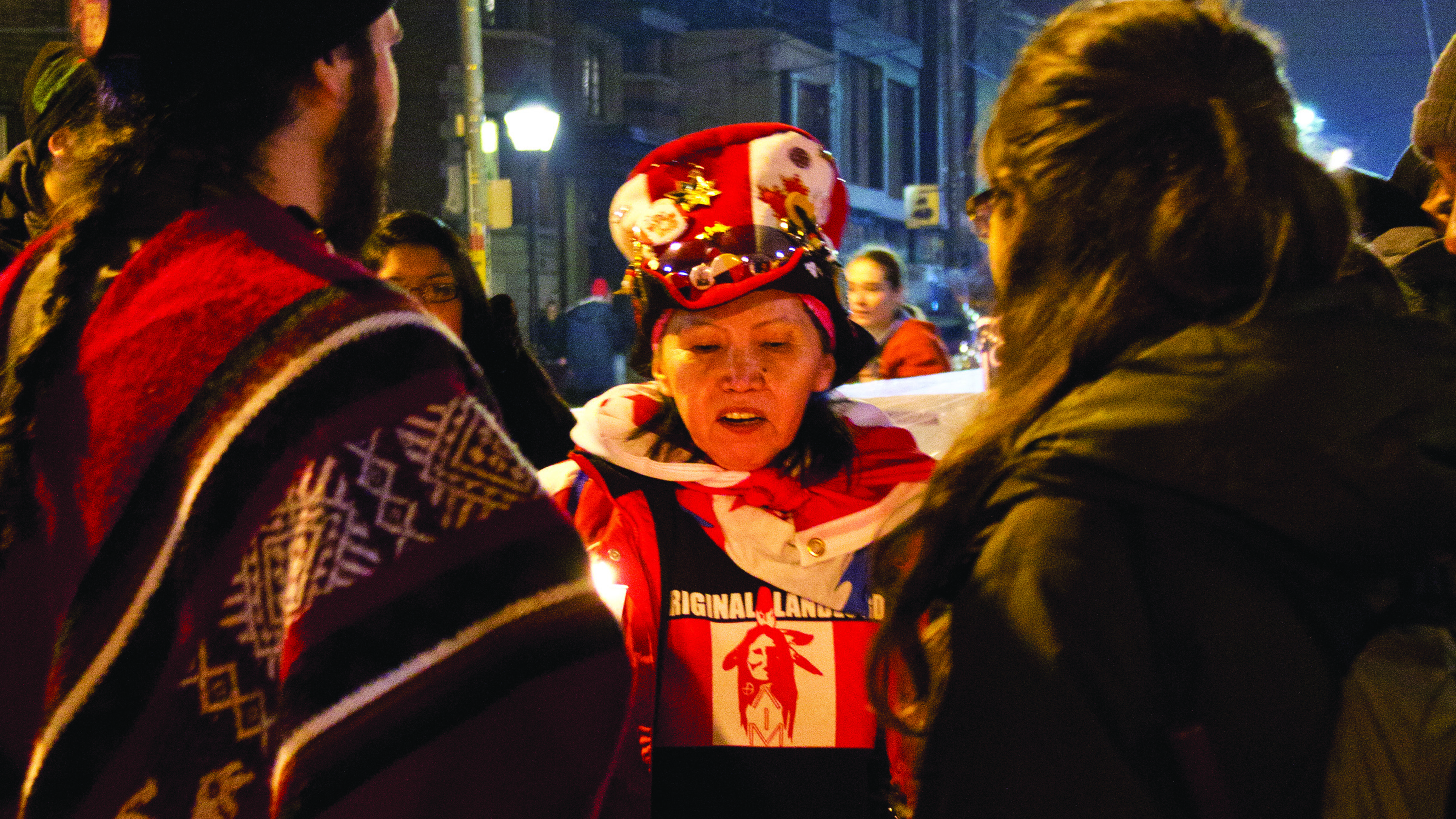 It couldn’t have been more perfect timing.

As Prime Minister Stephen Harper was wrapping up his meeting with First Nation leaders in Ottawa on January 11, I arrived at the heart of Idle No More’s downtown Toronto protest and blockade.

Lit by flickering candles and the passion of a group of strangers standing in solidarity, College Street and Ossington Avenue were re-opened to traffic by the police shortly after my arrival.

“First Nations have never been idle,” said non-Indigenous protester Gabriella Caruso. “They are the leaders in terms of non-Native people waking up, because [this issue] is affecting all of us.”

The Idle No More movement is protesting, among many other bills, Bill C-45, an omnibus bill that runs over 400 pages in length. The bill changed the Navigable Waters Protection Act (NWPA) of 1882, calling it the Navigation Protection Act (NPA). The NWPA outlined a process of approval and consultation that must take place in order for construction to occur around any water that could be navigated by boats of any kind. The new NPA requires only an approval process for development around one of a refined list of waterways set by the Ministry of Transportation, many of which pass through traditional First Nations land.

“I come from Métis ancestry and I think this is a really important time to stand up for our nations and to stand up for the rights not only for our indigenous brothers and sisters, but as well for the land,” said artist and protester Moe Clark.

The goal of Idle No More, as outlined by its founders, “revolves around Indigenous ways of knowing rooted in Indigenous sovereignty to protect water, air, land and all creation for future generations.”

“It even affects him,” said protester Cathy Walker, pointing to her son. “His rights are being taken away and unfortunately when a Native child is born, he can’t just be born a child – he has to fight for his rights.”

The Jan. 11 meeting, which included National Chief Shawn Atleo, Aboriginal Affairs Minister John Duncan, and representatives from the Assembly of First Nations, saw Stephen Harper attend for the entire length, even though he had earlier announced he would only attend portions of the meeting.

“For years we have been pushed around and judged and called names,” said Métis protester Alisa Courriere. “There’s no reason for it. This is just one big family and this is us saying, ‘We are here and we are not going to sit around while you destroy us.’”

Bonnie Whitlow, an Aboriginal Student Support Co-ordinator at Laurier Brantford, is working on putting together teach-ins on campus to inform students of the reasons behind the protest. She explained that if 100 Nipissing students were to enter her office, 20 of them would be doing placements where they are required to teach Indigenous Studies. They approach her for resources, telling her they want new and real information.

“I think our job is to educate our neighbours in a broad sense,” said Whitlow, a Mohawk woman from the Bear Clan who was born and raised on the Six Nations reserve.

She is planning to organize the teach-ins for mid-February.

Many criticisms have arisen since the birth of Idle No More. Some Aboriginals assume that the Governor General David Lloyd Johnston acts as a representative of the monarch, meaning they believe Johnston can directly contribute to policy discussions and act separately of the federal Cabinet when talking with First Nations.

“The Crown is the one that signed the treaties with the Native people, and if the Crown is not there, how can those treaties be honoured?” asked Philip Côte, one of over 200 protestors standing in downtown Toronto.

These people, 200 strangers standing in solidarity for equal rights, now stand on either side of the street holding dripping candles and hand-painted banners.