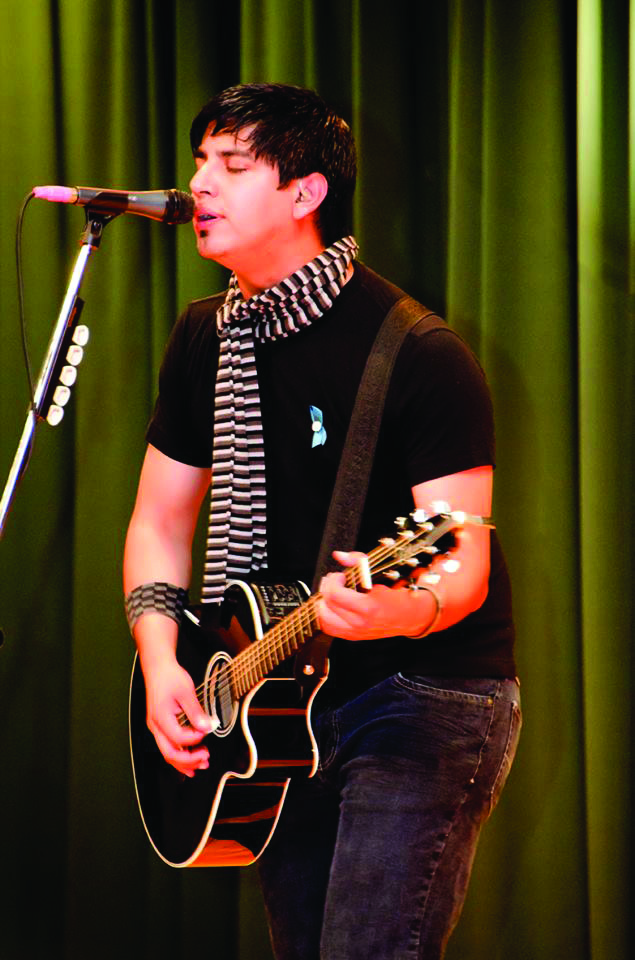 Armand is a Toronto-based singer/songwriter who has been pouring his heart and soul into his music since he was just a high school sophomore. He has an unrequited love for all performance arts, which is refreshing in this over-competitive, jealous world that artists often find themselves struggling in. Armand has been on multiple tours, including a cross-Canada stint, which has left him recognized across our great country. His shows are full of energy and he aims to bond and interact with the audience at every show, creating a unique and emotional atmosphere at every venue he brings his guitar to. His new album The Basement Demos dropped in October and we sincerely hope that another cross-country tour is in his future.

How old were you when you first picked up a guitar?

I first started playing guitar when I was 15. All my friends in high school were playing at the time or in bands and being in a band sounded like a blast, so I asked for a guitar that Christmas. I spent a few months teaching myself before I started writing my own songs.

What was your very first musical influence?

I grew up listening to a lot of punk pop bands like Blink-182, New Found Glory, Green Day and others of the sort, so I’d say they were part of my influences when I first started playing guitar and writing for my first band. As for writing and performing solo, Dashboard Confessional was my biggest inspiration. There was simply something about his writing, his performing and connection with fans that I wanted to be a part of.

You went on a bit of a hiatus, how was it getting back into the music scene?

The first thought that came to mind once I started writing again this year was, “What have I been doing all this time!?” I had been going through quite a lot over the course of the year – it was a really, really tough year to say the least. Starting back up with writing and recording became the best therapy I could’ve asked for. I wasn’t working with a producer or anyone behind me, so I was able to take my time and work at my own pace, which was a huge relief, unlike the first time I recorded, when I had people expecting things by certain deadlines. I thought it was going to be quite hard getting back into the swing of things, but it felt completely natural after a few days.

What have been some of the most influential moments in your life that have helped define your music?

I write from anything that I can think of, be it a personal experience, relationship – there have been quite a few songs about those. I don’t know if I can really define my music as anything other than amazing outlet to let emotion, personal experience and anything that goes on in my life out. As for influence, watching people connect with my songs has been one of the biggest things that are defined writing and performing music. For me, having even one person connect with one of my songs in one way or another is the best part of being a musician. You write a lot from the heart and for yourself, but knowing there are others that can understand, relate, and feel the music, lyrics, and emotion you put into your songs is the greatest reward. If there’s even one person out there that listens to one of my songs and says “I get it… this makes sense to me” or anything along those lines, I get such an amazing feeling of satisfaction. Playing a show and having 100 people sing your own songs back to you – there’s simply no better feeling than that.

If you could jam with anyone living or dead, who would it be?

There are some writers I admire quite a bit and would simply love to sit down with and learn from – just to wrap my head around their writing process. Chris Carraba (Dashboard Confessional), Adam Duritz (Counting Crows) and even Taylor Swift.

What has been your greatest musical opportunity thus far?

Touring across Canada promoting my first album was one of the best things that’s happened to me. It was an experience I’ll never forget. Meeting so many great new people and connecting with them on a musical and personal level every night was something I loved and can’t wait to do again. It’s such a thrilling and rewarding experience that I wouldn’t trade for anything in the world.

How many concerts and musicals would you say you attend each year?

Oh dear, you’re making me count ticket stubs? I lose count… I’m at some sort of show, be it a concert, musical, theatre or any form of live event at least once a week. Watching artists of any sort perform their craft and create something on a stage is something magical that I appreciate and love experiencing.

How have you changed since the beginning of your musical career?

I’ve matured, that’s for sure. I look back to when I first started writing for fun and just to play live – some of that hasn’t changed. I don’t write and play with hopes of making it huge (although I’d never complain if I did). It’s all about enjoying what you do and sharing that experience with others. My writing has evolved over time and I definitely feel that I’m writing songs with a lot more life experience in them. Vocally I’ve grown quite a bit as well, I seem to know what I’m doing now, compared to when I just tried to sing and hoped for the best.

Are you/when will you be completely satisfied with where you are in the musical world?

You want to play your music to as many people as possible that want to listen, so any opportunity to share that is satisfaction. I’ve played shows all over and having someone across the country reach out and say how much one of your own songs has touched them and resonated with their own lives is satisfaction enough. The fact that’s happened more than once is what keeps me going and makes me want to reach out to as many people as possible. As I mentioned before, having people sing your own songs back to you, knowing the lyrics, knowing the songs and being a part of that experience and sharing it with you – I’d say that’s satisfaction enough for me.

Are there any artists that you have absolutely no respect for?

Any person that puts their emotion, their effort and themselves into any form of art, be it music, performance, theatre, etc. is someone that has courage that can’t be bought. I admire and respect everyone that can put themselves out there for the sake of their work.

What’s your favourite type of candy?