Bringing the living wall back to life 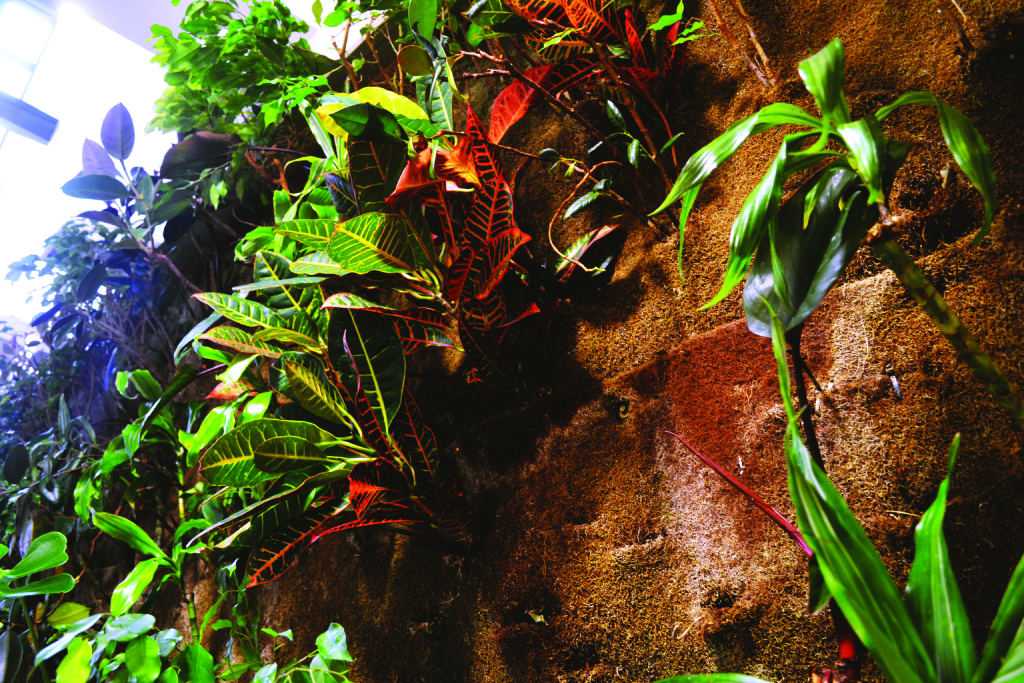 Standing in RCW, one is greeted with the predictably serene sound of trickling water, as the pumps behind Laurier Brantford’s living wall work to feed the green, robust, foliage that helps clean our campus air.

The living wall was a gift to our campus, bestowed upon us on through a generous $50,000 donation from the local law firm, Waterous, Holden, Amey, Hitchon LLP. A press release from 2009 boasts, “the opportunity to sponsor the living wall in Laurier Brantford’s new Research and Academic Centre is an ideal way to reflect these values while at the same time contributing to Laurier’s remarkable campus in the core.”

Nedlaw, the company which designed and installed Laurier Brantford’s living wall operates an intricate biofiltration system. According to the Nedlaw website, “air from the occupied space is actively drawn through the plant wall by either the HVAC system or onboard fans and then returned to the occupied space. As the dirty air from the space comes in contact with the growing (rooting) media, contaminants move into the water phase where they are broken down by the beneficial microbes.” In turn, the living wall takes the dirty air from RCW in through an HVAC system, breaks it down and reproduces clean, healthy air for all of the students at Laurier Brantford to breathe in. The living wall looks good, and is good for you.

Mary McClelland from Nedlaw explained that living walls also work to reduce the energy that is needed within a space. As no external air needs to be brought into the mix, the air in turn remains at a constant temperature eliminating the need for additional heating or cooling.

The living wall has become synonymous with Laurier’s efforts towards sustainability. The greenness of the space a symbol for Laurier’s desire to portray itself as a green institution. Images of the wall are featured on Laurier Brantford’s website, Laurier’s Sustainability Office website, and Facebook page.

At Laurier Brantford we have clubs, like Eco Hawks, working to rally our interest and motivate the student community towards a state of consciousness about one’s environmental impact. The living wall is an icon of Laurier’s commitment to greenness. According to Nedlaw, “there are increasingly strong links between greening the indoor space and the well-being of the occupants. Greening the space reduces the stress levels, increases the productivity and reduces absenteeism.”

The pretty plants that decorate RCW, have made a long trip to be part of our campus at Laurier Brantford. Nedlaw plants come all the way from Florida, this is because facilities down south have the capacity to grow plants year-round that are big and beautiful enough to be displayed on the walls.

Despite its beauty, and complexities, and the campus push towards engaging with greenness, we failed to notice when the pump shut down and the wall began to decay. The pretty green leaves turned brown. The trickling pump went silent. The growing root media began to rot. RCW smelled pretty funky.

“Unfortunately, the pump that fed water up throughout the living wall broke and it was not noticed right away,” Lisa Keys, Manager of Facilities Operations at Laurier Brantford explained. “Because of this we experienced excessive and unexpected plant decay.”

Nedlaw explained that the plants in the living wall are “bare rooted,” meaning that there must be a constant flow of water to sustain the plants’ life. “They need their water,” said McClelland.

Last week a representative from Nedlaw came to our campus early Thursday morning to pluck the rotting, brown, remains of plants from of our living wall, leaving behind the plants that survived, holes, and some empty spaces.

According to Keys, this isn’t the first incident of the pump malfunctioning in RCW.

“From my knowledge this happened about two years ago,” Keys explained. Back then they were lucky to have noticed the pump failure early enough to avoid having to perform any invasive teardown of decay.

Are Laurier Brantford students different than they were two years ago? How did they notice the pump was off, when we did not? Do we take time to stop and appreciate the intricacies of our campus, the details that make Laurier Brantford unique? Perhaps if we were more aware, more conscious, more engaged, we’d have noticed the browning leaves. But we didn’t. We were too late.

Our failure to notice the living wall, drudges up familiar images of sitting in Brantford Foundation courses this semester. I am often burdened and stirred by the uncomfortable silences that arise after a professor proposes a question to lecture-goers. It is almost painful to sit in the apathetic silence, as students cower, avoid eye contact and leave the question lingering, unanswered in the static, quiet air.

“Everyone always notices when the smell comes,” Keys explained. “We had more emails and phone calls about the smell than we have ever had from people inquiring about what the wall is.”

Keys explained that new plants will be coming in order to redress and renew our living wall, but they have to make the trek from Florida first.

A “fail-safe buzzer” is being installed to the living wall’s pump, so in the case it ever shuts down again, an audible alert will sound to express that the wall needs some TLC.

Perhaps we’ll pay better attention this time by actively noticing the features that make our campus special, and care for the details that are integral to portraying our narrative of sustainability and greenness. Let’s not wait for the smell to set in before we start talking.