Brantford keeps its eye to the sky 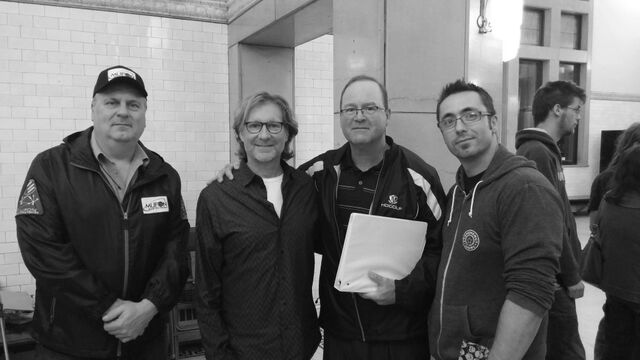 The group met up on Friday, October 9 in the lobby of the Brantford Via Rail station where they had Emmy Award winner Sid Goldberg talk about his upcoming documentary and his very own encounters with alien species. Of the group of people who had showed up for this meeting, half had at some time or another encountered aliens. All of these people were locals who had the encounter here in Brantford.

“Brantford is a hotspot and it has been a hotspot for a lot of years,” said the Ontario Provincial Director of MUFON, Stuart Bundy. “We have a lot of UFO sightings that get into MUFON from this area and we think that a lot of it is because of the proximity of the First Nations folks. They’re very sensitive to spirit, to other realms, they’re very in touch with the earth and very psychic people. We think that might be one of the reasons, the other might be geology.”

The group spoke about encountering a variety of different species of aliens and spacecraft. The most common species encountered were Mantismen. Mantismen are one of the 52 documented species of aliens to visit this planet, and the number continues to grow.

One woman at the meeting brought up an encounter with a race none of the Field Investigators had heard of, describing its appearance as being similar to a clown.

Another topic covered at the MUFON meet-up, was interplanetary reincarnation. Goldberg and another member said they had encountered loved ones of their old lives as an alien race. During an out of body experience they were abducted and promised to be reincarnated as an alien again after they had learned unknown lessons during their time on earth.

MUFON has been operating in Ontario for the past twenty years, doing field work and research from corner to corner of this province. The entire organization has been operating since 1969, following the closing of Project Blue Book. For those who don’t know, Project Blue Book was a systematic study of UFOs funded by the United States Air Force until 1969. Once closed, citizens felt the need to keep track of UFOs since the government ceased. They now hold meetings for their chapters three to four times a year, where they meet up and discuss their findings and encounters.